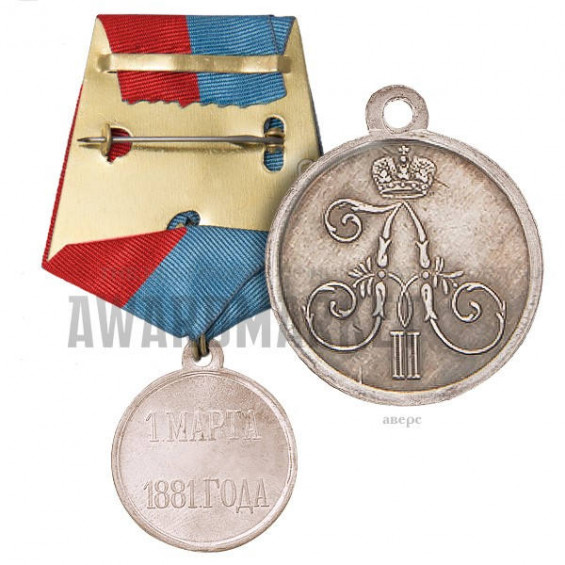 IMPERIAL RUSSIAN MEDAL WITH A DESCRIPTION OF THE AWARD "1 MARCH 1881" ALEXANDER II On March 1, 1881, the last attempt was made on Alexander II, which led to his death. Several people, who were members of the Narodnaya Volya organization, were involved in the assassination attempt. The encroachment occurred on the embankment of the Catherine Canal in St. Petersburg. The medal "March 1, 1881" (1881) is a commemorative award of the Russian Empire. The medal was established in connection with the attempt on Alexander II, as a result of which he was killed. The award was intended for persons who were with him at the time of the assassination attempt. In total, two hundred pieces of silver medals were issued by the St. Petersburg Mint. By April 28, they were transferred to the War Ministry and two days later they were approved by Alexander III. On March 28 of the same year, awards were presented for delivery to the General Staff of the Armed Forces. The medal "March 1, 1881" (1881) was awarded to persons who were present at the tragic events that occurred on that date. The list of the persons awarded was personally approved by Alexander III. At the suggestion of Prince Mikhail Nikolayevich-brother of Alexander II, 140 people initially received bonuses. This category included all six Cossacks of the escort, who accompanied Alexander III, all eyewitnesses of this tragic event (56 people). Medals were also awarded to some sailors of the 8th Fleet crew and the cadet of the 1st Military Pavlovsky School (64 people), as well as some ranks guarding his Imperial Majesty (4 people). The award was later received by doctors trying to save the life of the emperor: Botkin, Bogdanovsky, Golovin, Kruglovsky. The medal was awarded to cadets Alexander Kaitov and Cossack Thomas Inichkin, who escorted the People's Rysakov. Also it was received by persons who, for one reason or another, were deemed worthy of wearing it. On the front side of the award there is a vintage monogram of Alexander II, which crowns the great imperial crown, and on the reverse there is an inscription from two lines "1. MARCH 1881. YEAR." Reward in size of 28 mm with an ear for fastening to a tape or колодке. Wear it on the chest. For the medal was intended a unique Andreevsky-Alexandrovsky ribbon. Characteristics of the award: Height: 90 mm ± 2 mm Diameter of token: 28 mm ± 1 mm Thickness: 2 mm ± 1 mm Weight 26 ± 2 gr. Metal: Nickel silver Ribbon: Andreevsky-Alexandrovsky Package Contents: - an exact souvenir copy of the award; - insert with a description of the award; QUALITY COPY