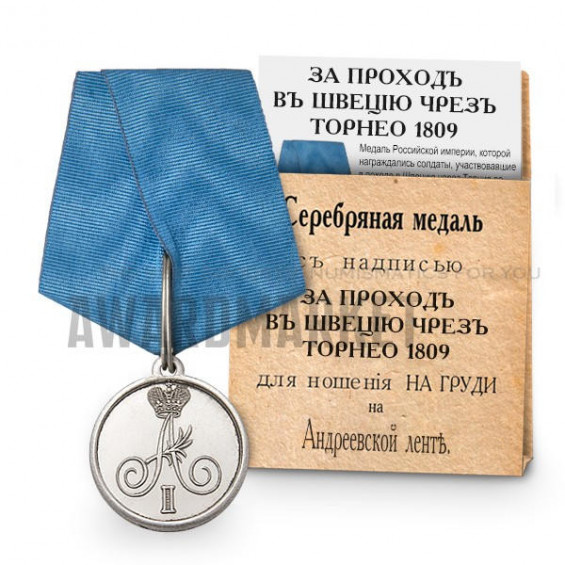 Imperial russian medal "For the passage to Sweden through Torneo" Alexander I. copy

IMPERIAL RUSSIAN MEDAL WITH A PAPER DESCRIPTION OF THE AWARD "FOR THE PASSAGE TO SWEDEN VIA TORNEO" ALEXANDER I Medal "For the passage to Sweden via Torneo» - Medal of the Russian Empire, which was awarded to soldiers who participated in the campaign in Sweden via Torneo during the Russian-Swedish War (1808-1809). Medal "For the passage to Sweden via Torneo" was founded by Alexander I 14 (26) in April 1809 in connection with the military successes of the Russian army during the Russian-Swedish war. Given to soldiers squad PA Shuvalov, the participants of the campaign in Sweden along the coast of the Gulf of Bothnia by city Tornio (now Tornio, Finland) and the river Tornio (Torne). During the campaign at the village Calix was surrounded and surrendered large detachment of Swedish troops. Characteristics of the award: Height: 90 mm ± 2 mm Diameter of token: 28 mm ± 1 mm Thickness: 2 mm ± 1 mm Weight 26 ± 2 gr. Metal Brass with silvering Block: Imperial wide 50 mm Ribbon: St. Andrew,moire 28 mm Package Contents: - an exact souvenir copy of the award; - insert with a description of the award; QUALITY COPY