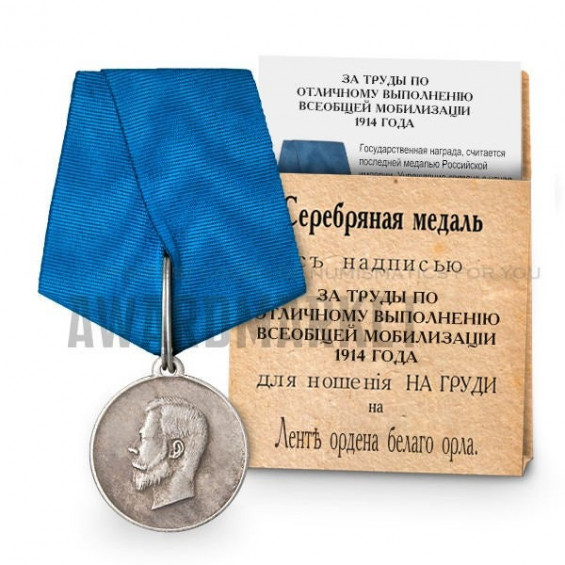 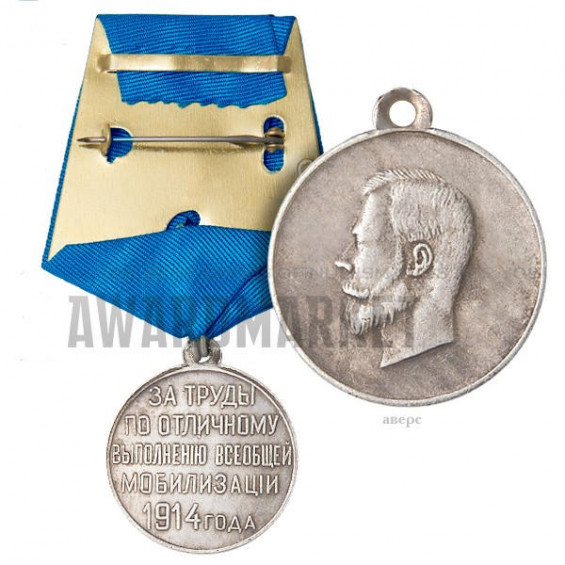 Imperial russian medal "For the works on the excellent fulfillment of the general mobilization of 1914" Nikolay II. copy

IMPERIAL RUSSIAN MEDAL WITH A PAPER DESCRIPTION OF THE AWARD "FOR WORKS ON THE EXCELLENT FULFILLMENT OF GENERAL MOBILIZATION OF1914"" NIKOLAY II The medal "For Works on the Excellent Implementation of the General Mobilization of 1914" is a state decoration of the Russian Empire, which is recognized as the last award that was established in the Russian Empire. This sign is dedicated to the beginning of the First World War. The award is intended for persons who were engaged in planning, organizing and conducting a rapid and successful mobilization of the population. The medal decided to establish by decree Nicholas second on February 12, 1915 on the position of the Council of Ministers. The Senate was given this decree by the Minister of Justice I. Shcheglovitov. The badge is the only award in the world that was created in connection with the mobilization in the army. Encouragement was given to officials who, in carrying out their duties, influenced the planning or implementation of mobilization. Also, the award was given to carriers of military, medical cargoes and troops. After December 8, 1915, the insignia began to be received by those who conducted sports training for pre-conscription youth. The award was given free of charge, and along with it everyone received a document for the right to wear a medal. Characteristics of the award: Height: 90 mm ± 2 mm Diameter of token: 28 mm ± 1 mm Thickness: 2 mm ± 1 mm Weight 26 ± 2 gr. Metal Brass with silvering Block: Imperial wide 50 mm Ribbon: White eagle's ,moire 28 mm Package Contents: - an exact souvenir copy of the award; - insert with a description of the award; QUALITY COPY