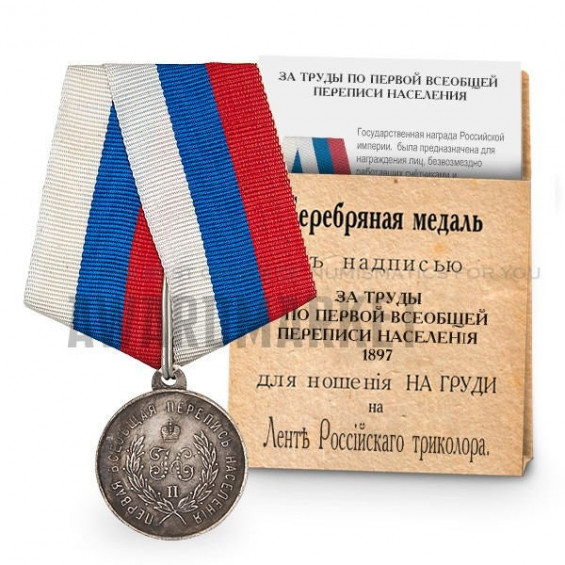 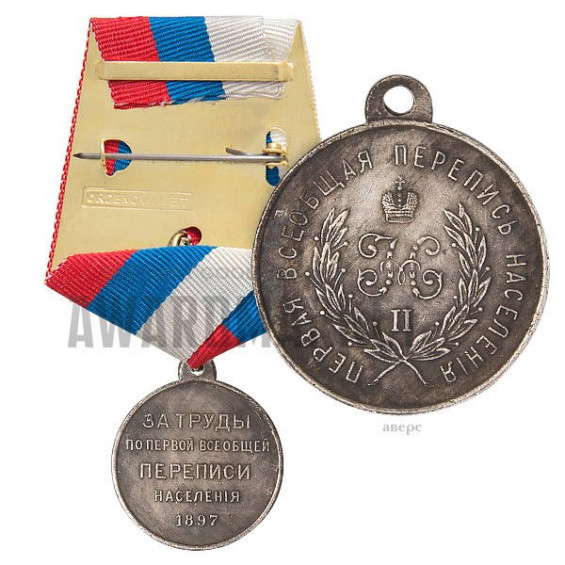 IMPERIAL RUSSIAN MEDAL WITH A PAPER DESCRIPTION OF THE AWARD "FOR THE WORKS ON THE FIRST GENERAL POPULATION CENSUS NIKOLAY II The medal "For works on the first general population census" is a state decoration, which was presented to persons who worked as organizers and counters for free during the first general population census that took place in the Russian Empire in 1897. The medal was established on November 21, 1896, after which this decree was handed over to Minister of Internal Affairs I. Goremykin. The sign did not receive degrees of distinction. The award was intended for both sexes. Ivan Goremykin received the authority to personally identify people worthy of wearing a medal. Only those people who worked on a free basis, as well as the organizers of the action and those who in every way contributed to its holding, could be encouraged by the minister's decision. In addition to the medallion, cavalry received a certificate that allowed to wear a badge of distinction. Characteristics of the award: Height: 90 mm ± 2 mm Diameter of token: 28 mm ± 1 mm Thickness: 2 mm ± 1 mm Weight 26 ± 2 gr. Metal Brass with silvering Block: Imperial wide 50 mm Ribbon: Russian tricolor ,28 mm Package Contents: - an exact souvenir copy of the award; - insert with a description of the award; QUALITY COPY