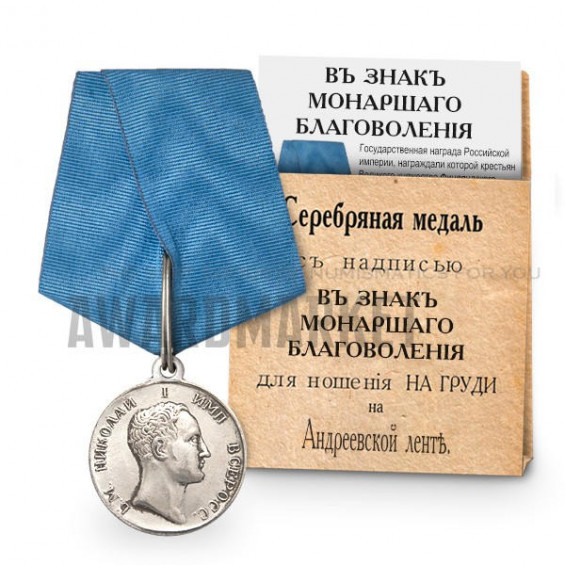 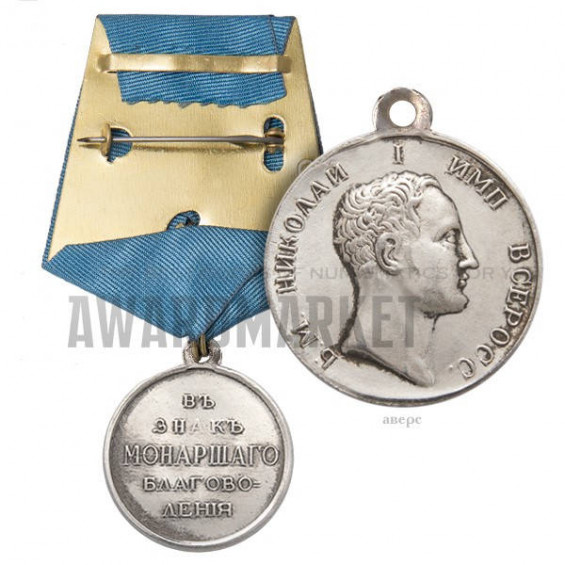 Imperial russian medal "As a sign of monarchy favor" Nikolay I. quality copy

IMPERIAL RUSSIAN MEDAL WITH A DESCRIPTION OF THE AWARD "AS A SIGN OF MONARCHY FAVOR" "As a sign of monarch's favor" - a medal, specially established to reward the peasants residing in the Grand Duchy of Finland. The medal is characterized by the fact that there were very few famous awards: at the time of the reign of Nicholas I there were only four such awards. Three of them - peasants of the Kuopiok province of the Grand Duchy of Finland received this award in the summer of 1826, and the fourth medal was struck and sent to Finland in the autumn of the same year, but to whom it was not known. Under Alexander II, another award was held in the province of Vaza. Then they awarded a man named Hannukel. This concludes the information about the awards. Characteristics of the award: Height: 90 mm ± 2 mm Diameter of token: 28 mm ± 1 mm Thickness: 2 mm ± 1 mm Weight 26 ± 2 gr. Metal: Nickel silver Ribbon: Andreevsky, 28 mm Package Contents: - an exact souvenir copy of the award; - insert with a description of the award; QUALITY COPY